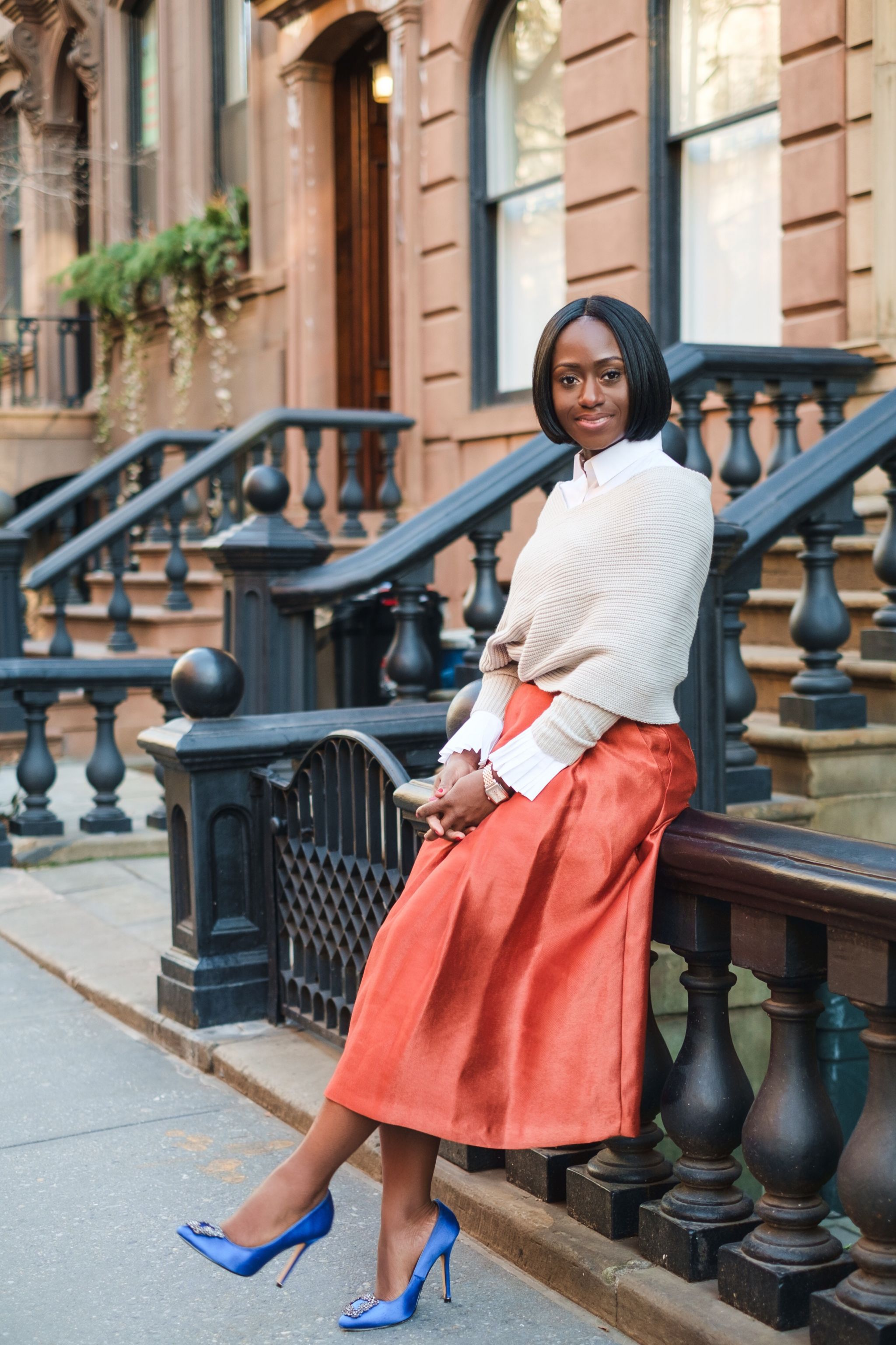 I could see the Breaking News now: NYC native young girl dies from head trauma after brick is thrown threw her window. 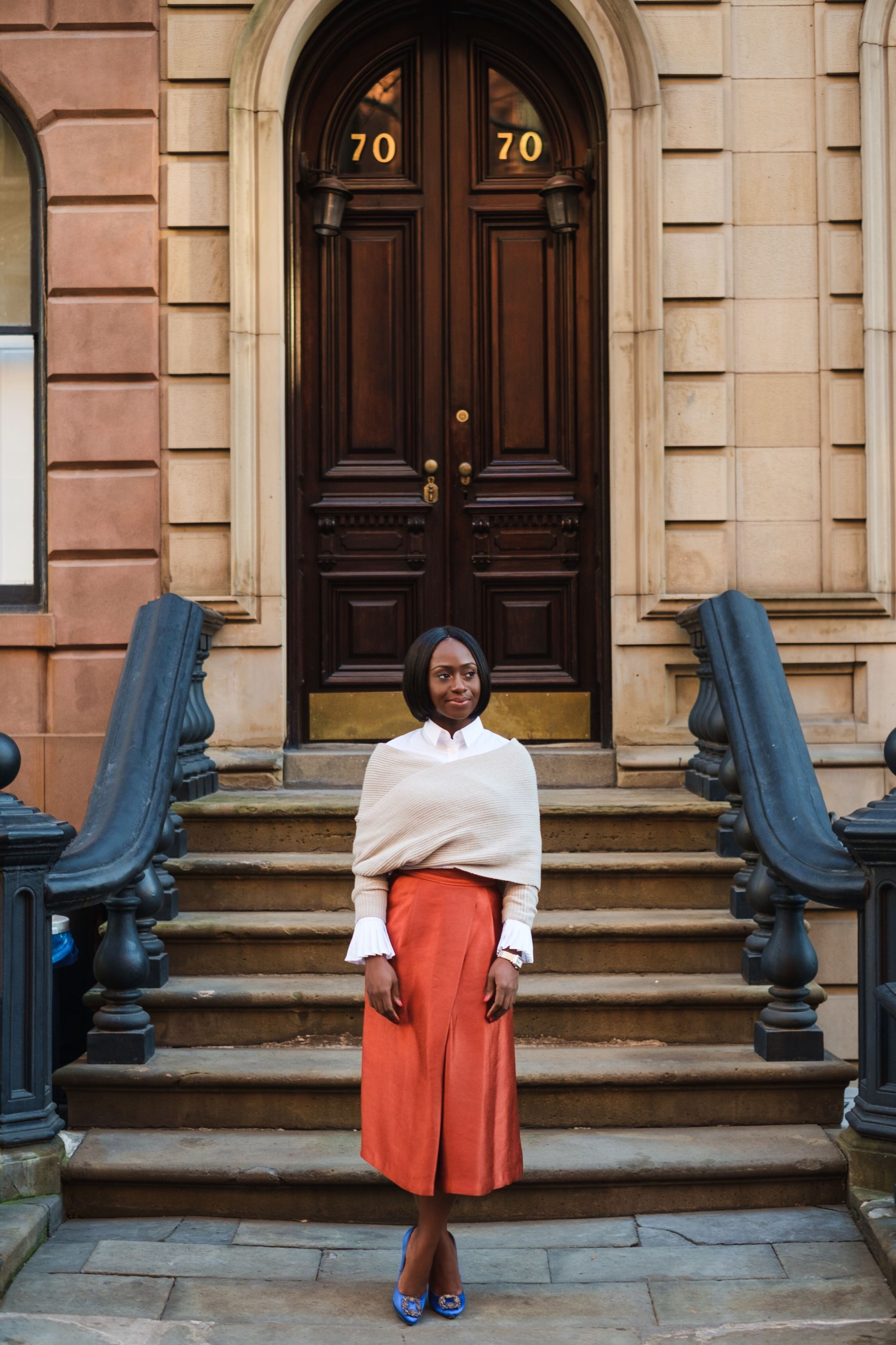 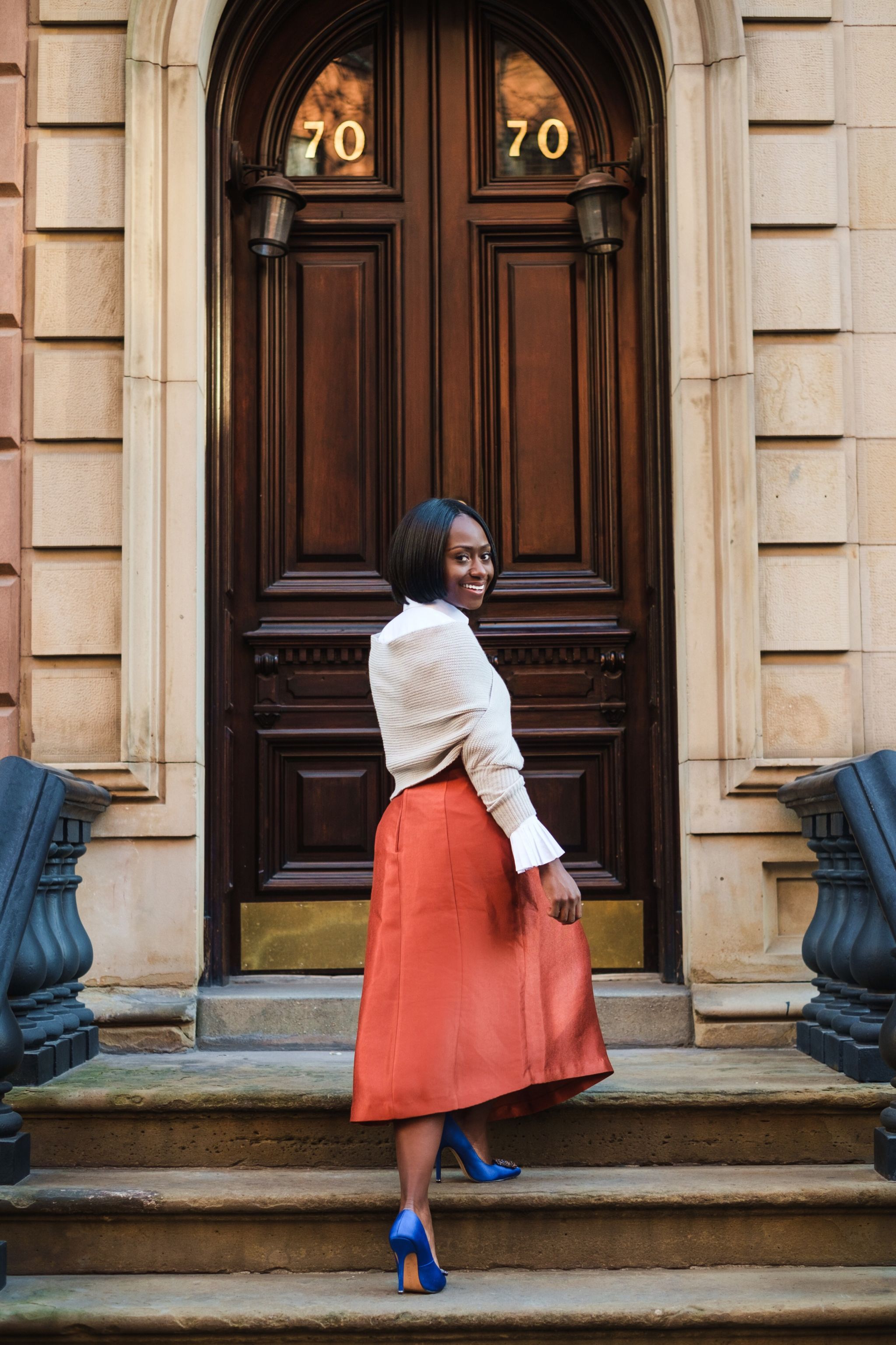 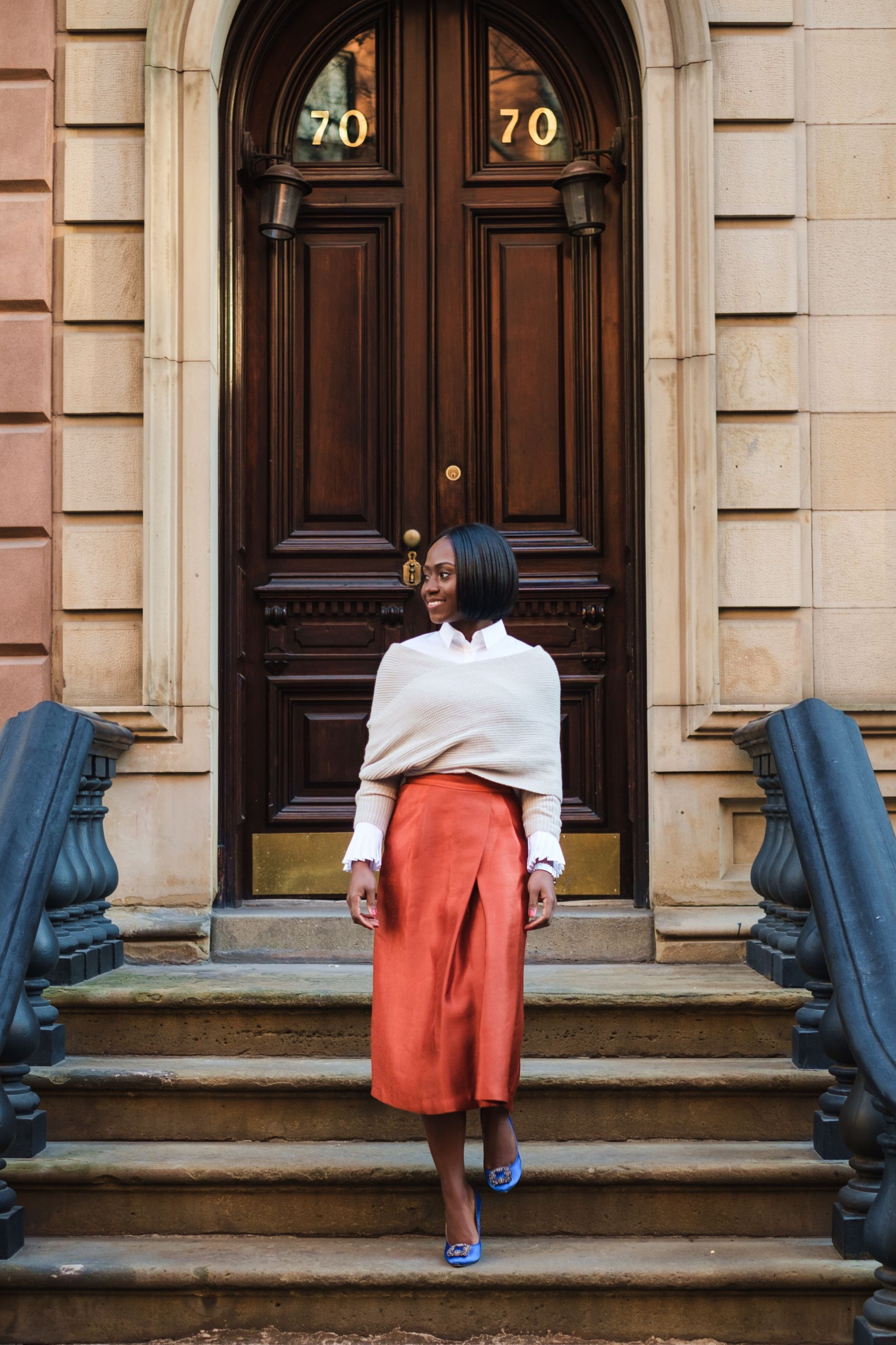 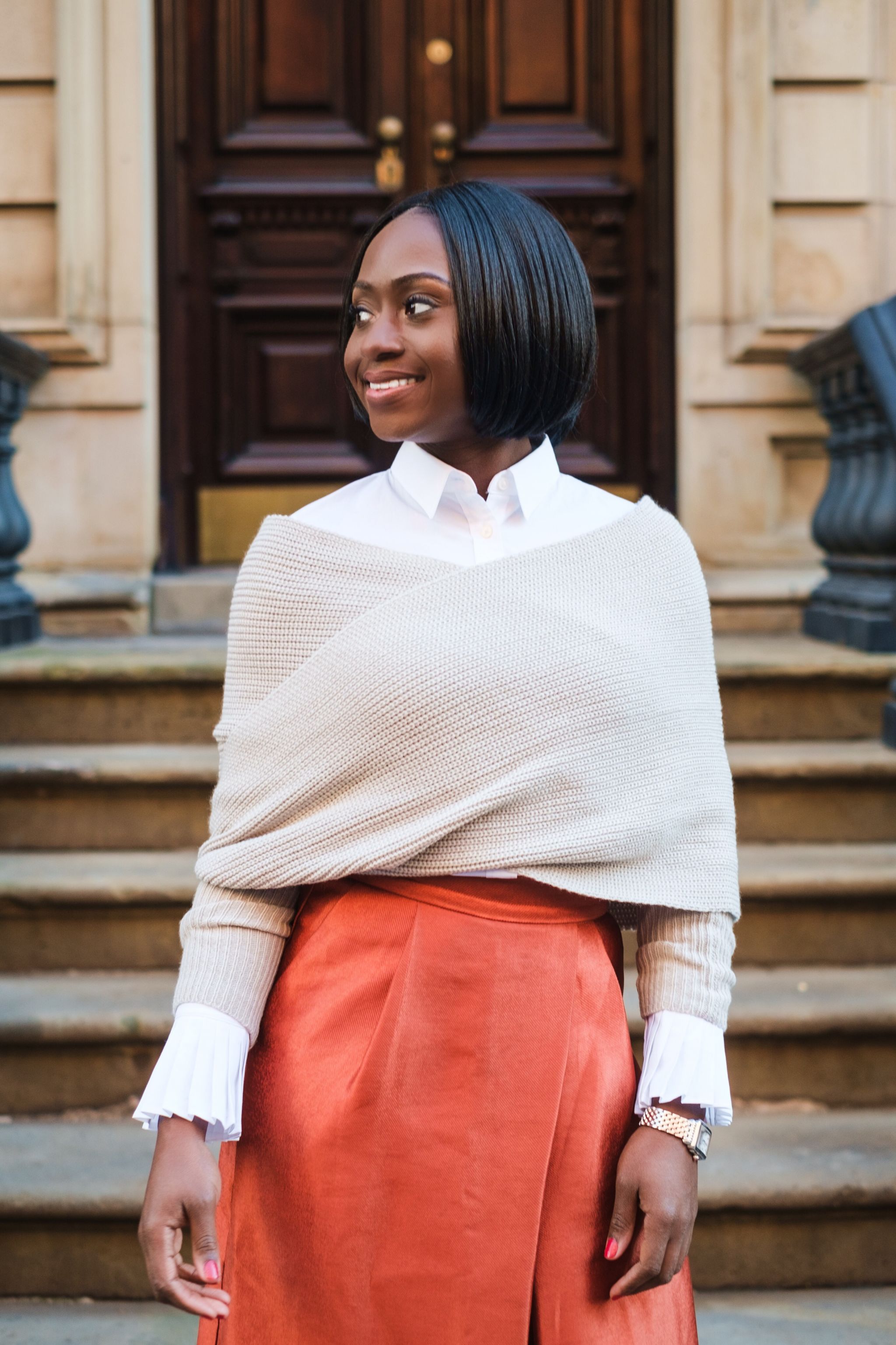 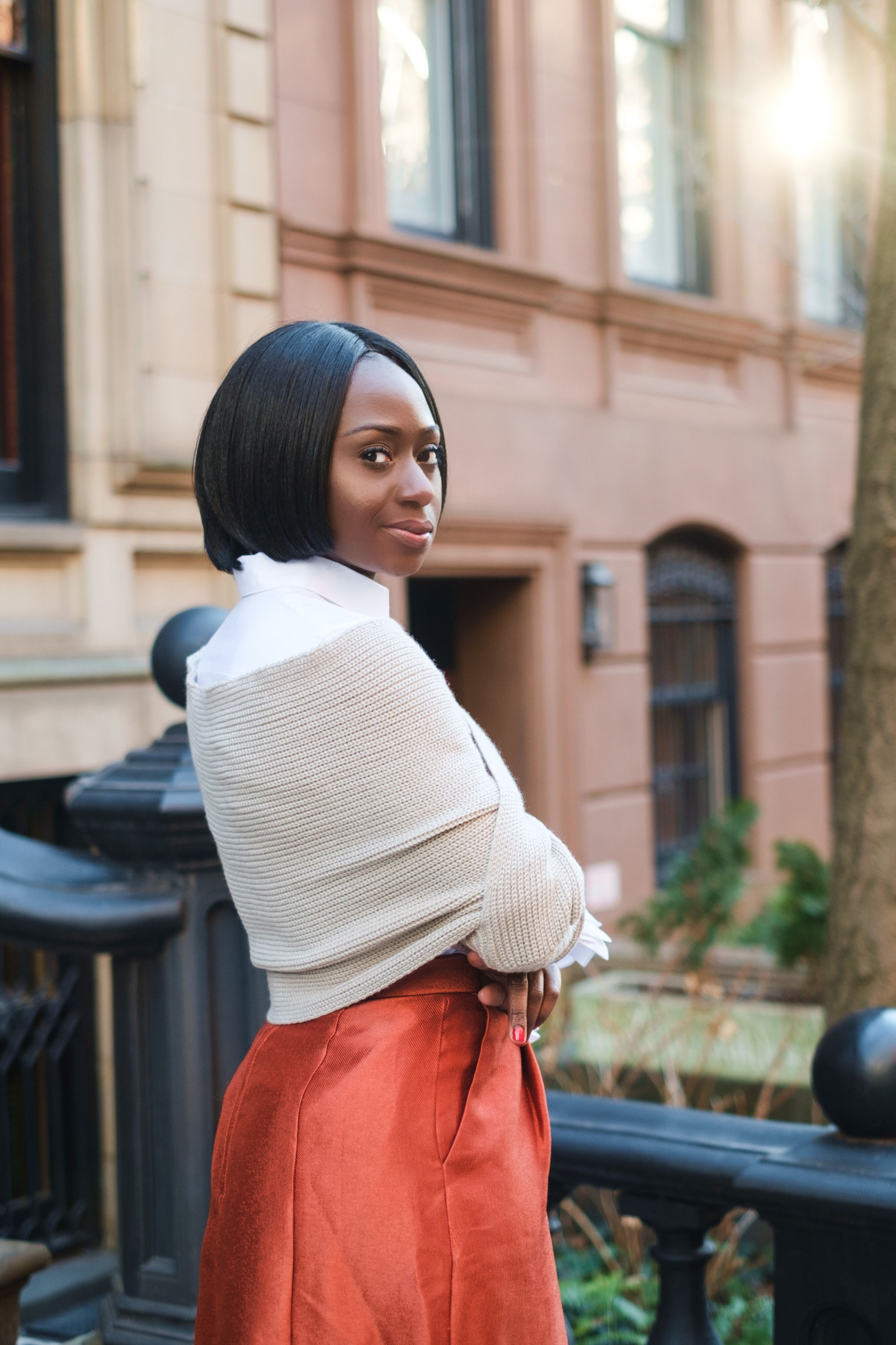 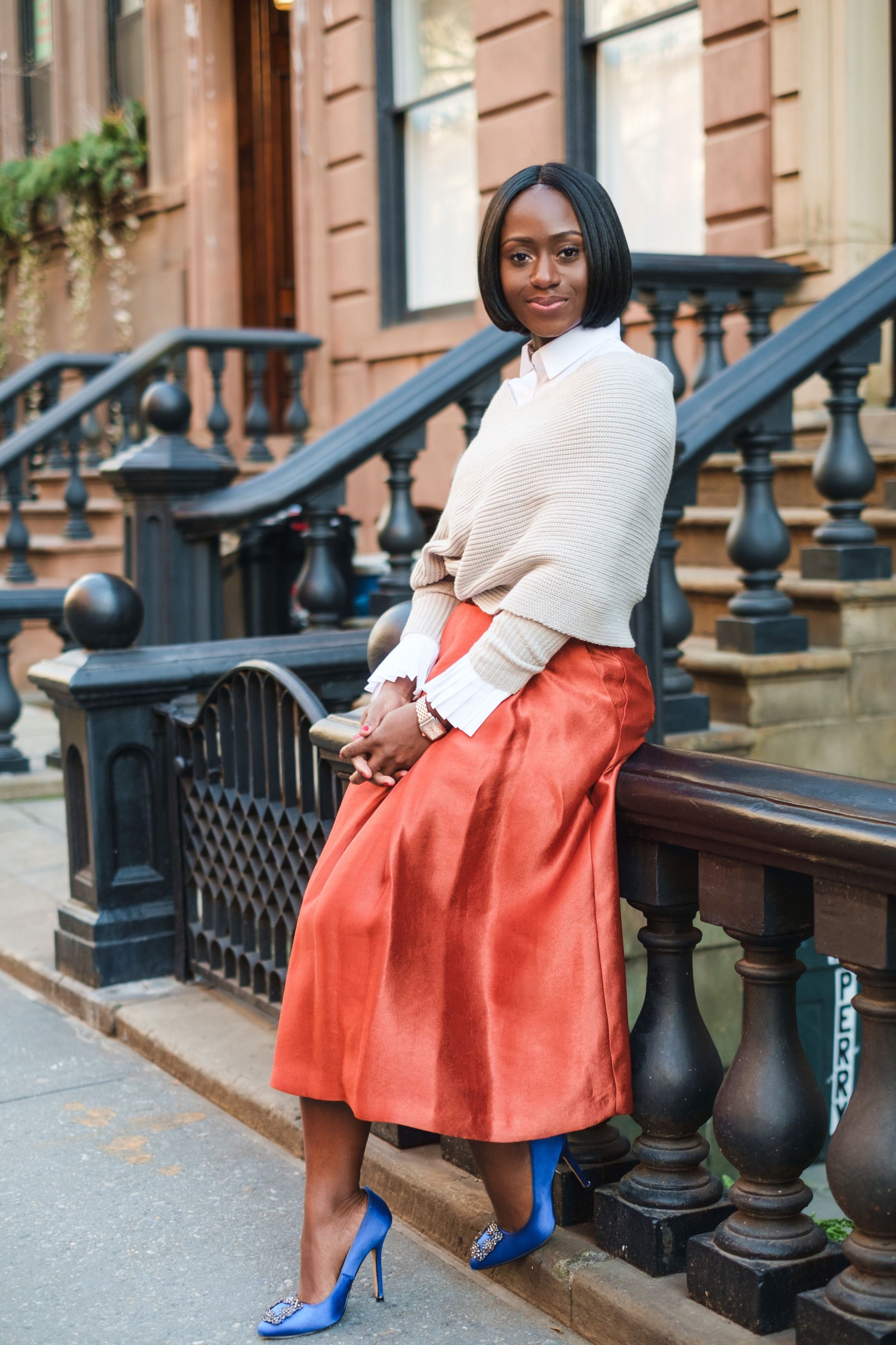 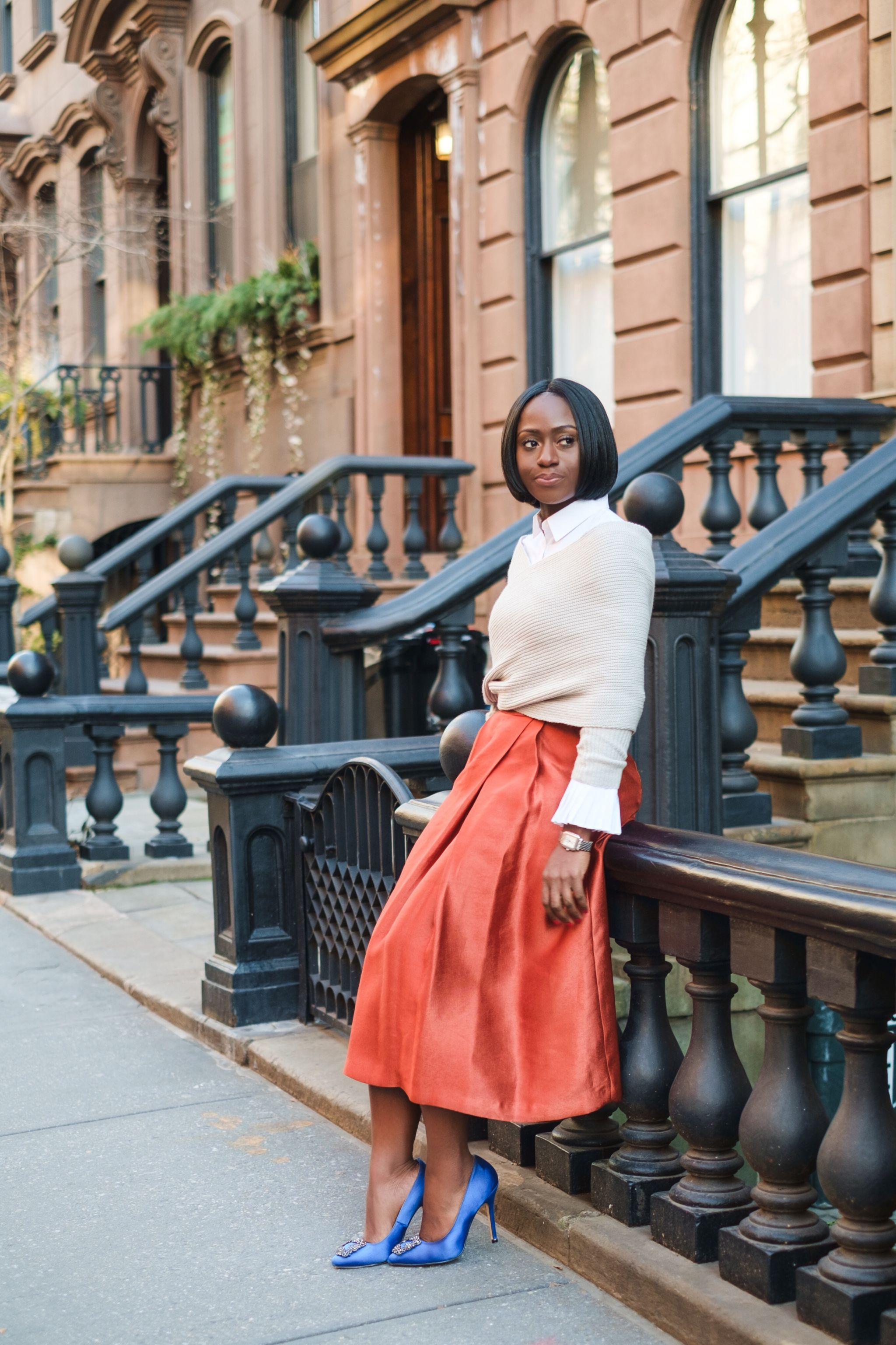 Sweater: c/o Make Me Chic (found it in black and red too) ; Shirt: Banana Republic (bought this one too) ; Skirt: H&M -old(but love this one) Shoes: Manolo Blahnik (love this inspired one)

Those of you who have been reading my blog for some time now, know that I used to live in Philly. Well, during the last year of my stay in that city, I managed the biggest salon (50 combined barbers and stylists) in Philadelphia. (This was in addition to working full time in my career. Talk about a hustlng!) Perhaps I’ll give you that story in another Testimony Tuesday post BUT as the manager of the salon, I was responsible for hiring and firing all of the assistants. One day as I sat at the front desk, I saw this teenager come inside for his haircut. As time went on, and he would come in the salon often, and I took a liking to him. I’m not sure why but something about him made me want to invest in his future.

After speaking with him, I was made aware that he was in 8th grade heading to a charter high school in the fall, he wanted to be a professional baseball player, and he lived with his mother in my across the street from me. I decided to hire him to sweep the salon for extra cash. It was summer time, and I thought it would be nice to make a few dollars before heading to high school. He came to the salon every day and I gave him$20 daily to sweep. I liked this little boy so much that I spoke to his mother about his future and told her that as long as I lived in Philly, I would make sure he didn’t become a statistic. If anyone knows anything about Philadelphia (particularly North Philly) , than you know how high crime rate is; how and most African- American boys don’t live past 18 years old. His mother respected me so much, she would even ask her son to knock on my apartment door requesting money for groceries. So in addition to the $20 I paid him for working at the salon, there were a few occasions I gave extra cash for living expenses. Keep in mind this was money coming out of my pocket; nonetheless it was chump change as I was making a ridiculous amount of money between consulting at a brokerage firm and managing the salon.

One day, I saw a trailer for the movie, 42– the movie about Jackie Robinson,  the legendary baseball player who broke Major League Baseball’s color barrier when he joined the roster of the Brooklyn Dodgers.  I knew this kid would love to see the movie so one day I asked him if he would like to see it after working a shift in the salon. He said yes and that he wanted to take his girlfriend. I laughed and told him to come for the money the following day. Following day came and the kid came to the salon with another teenage boy requesting for the money. I asked him who his friend was and his friend immediately responded by saying “I don’t need your money for no movie. I’m about to go home.” How rude! Long story short- I gave the kid about $30 for movie tickets and snacks for him and his little girlfriend. However, what they didn’t know was that I, too, wanted to see the movie and I had a date by myself for the same showing.

As I got to the theater, I saw the kid with the same rude friend from earlier sitting down snacking on popcorn. What a shock?! Would it have killed the boy to just tell me he’s going with his friend instead of his girlfriend. When they saw me, they tried to hide but it was obviously too late. I ignored them and walked up the stairs to a seat in the back. The following day, I told the kid that because he lied, he was not allowed to work in the salon for two weeks. Instead of apologizing, he walked away. That will teach him right? WRONG.

A few days later, while sitting on my bed in my 1st floor studio, I was startled by a brick thrown threw my window that just missed my head. PANICCC ATTACKKKKKK. Who would do such a thing? Who would try to kill me? Who even knew where I lived!? After settling down from the panic attack, I called 911, and waited on the floor under my bed. Terrified for my life, I didn’t move until the following morning. I realized I fell asleep in that position and the police NEVER called or showed up. I thought for days who would do such a thing to me; couldn’t conclude on nobody but the kid. But I have to admit; I was in denial. I never expected him to do such a thing. He was a GOOD kid. Few days later, as I was sweeping my studio, ANOTHER brick flies threw my window; this time landing right in front of me. Now, I’m running out of the door outside to see who it could be… No one in sight. Just a couple sitting in the car a few meters down. I asked them if they saw anyone by my window and they said “Yes a few black kids just ran away from there. We heard something shatter but thought maybe they broke a glass bottle.” BINGO! It’s this kid and his friends! I ran straight to his mother’s apartment and told his mother everything and how disappointed I was in her and in her son. She said she would speak to him when he got home and a few hours later, she was in front of my door with her son. I didn’t answer. My lease was up for renewal in less than a month but I knew I had to move. I lived in Philly alone. All friends and family were in NYC. I refused to put my life in danger for a 13 year old.

I learned a valuable lesson during that time. Besides concluding that the Philadelphia Police Department won’t show up for emergencies because they’re too busy dealing with murders throughout the city; I also concluded that it isn’t everyone you can be all chummy chummy with. The Christian mandate to love our neighbors as ourselves does NOT mean put your life on the line because you’re naïve. Wisdom is the principle thing to get! Especially for a young 20 something year old in a strange city, the last thing I should’ve did was allow the boy to see where I lay my head. On this day of Love, I am cautioning you to love in a careful way! You ain’t Jesus. Don’t suffer persecution and death for just every and anyone. Glory be to God for saving my life from my own ignorance.